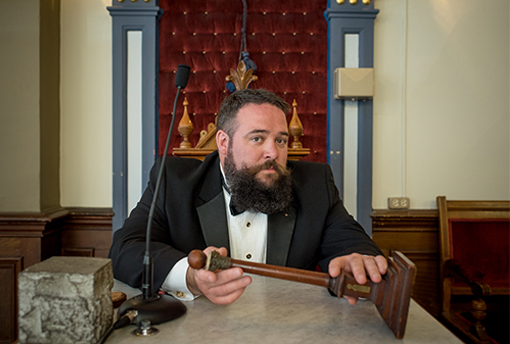 The two lots are 120 feet wide and 120 feet long and cost $1,750.00. The title to the property including Ashlar Manor next door is held by the Masonic Temple Association which was incorporated by a private act of the B. C. Legislature in 1898 as a non profit society (prior to the existence of the Society Act).

We meet at 650 Fisgard St. Victoria BC, on the second Monday of each month (except in July and August) at 7:00pm until 9:00pm for our GP meetings. The monthly Lodge meetings are on the fourth Thursday of every month. Fellowship starts at 5:30pm, Repast 6:00pm and Lodge tyles are at 7:00 PM. To avoid any conflicts with Thanksgiving, our October meetings are posted in our calendar as TBA.

The ideal Masonic hall is to have the lodge room on the second floor of the building with the entrance marked by two columns. In some instances, the pillars are named or lettered. The main lodge room should be rectangular running east to west. The Victoria Masonic Hall conforms to these specifications subject to the grid pattern of the streets.

The lodge room is 30′ wide, 57′ long and 27′ 6″ high. This is the same dimensions as the temple in Jerusalem constructed by King Solomon. However the interior is open by the omission of the inner sanctum. The ceiling represents the sky over Jerusalem at the Summer Solstice. 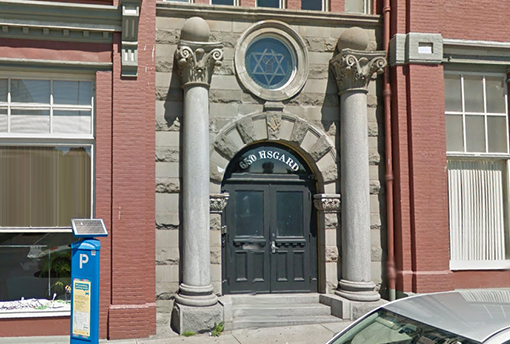 The entrance door has pillars on both sides. Above the door is the stain glass window displaying a star constructed be two equilateral triangles with one inverted. Until the 1890s this symbol sometimes referred to as the Seal of Solomon was a widely used Masonic symbol. However in the 1890s, Zionism widely adopted this device (Star of David) as its’ symbol which is the marker for most synagogues constructed subsequent to 1890.

Thus it fell out of Masonic use. For instance, the Emanu-El Synagogue here in Victoria constructed in 1863 displays the Rose of Damascus in their stained glass window at the entrance. It does not display either the Star of David or a Menorah on its facade like other synagogues in North America.

For there should be Wisdom to contrive, Strength to support & Beauty to adorn!